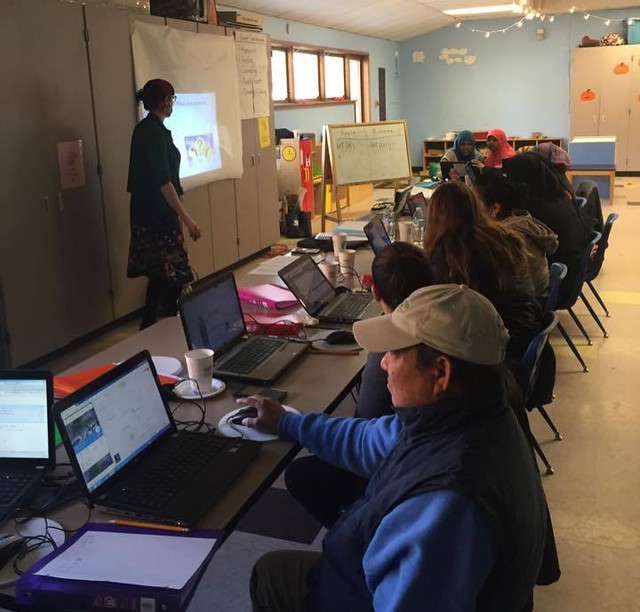 Imagine how hard it would be to access information and resources if you didn’t have computer skills. Now imagine if, on top of that, you have just moved to a foreign country and were still learning the predominant language.

The goal for the Coalition for Refugees from Burma’s program “Nexus: Connecting Newcomers with Technology” is to remove those barriers for recently-arrived refugee and immigrant communities.

Responding to the change, in 2016 CRB started to expand their computer literacy programs to serve all recently-arrived refugees and immigrants. CRB collaborated with partners like Seattle World School, Somali Youth and Family Club and the Seattle University Center for Service and Community Engagement to ensure its computer classes are linguistically and culturally relevant. It has also expanded its program to include immigrants and refugees in Kent.

According to Siobhan Whalen, a program manager at CRB, this past year in the Kent program alone, CRB served immigrants and refugees speaking over 13 languages from eight countries.

Rosa, an immigrant from Mexico who moved to Seattle in 2002, is one of those clients. Her son goes to Bailey Gatzert Elementary School, where the Seattle University Center for Service and Community Engagement hosts “Family Talk Time,” a program to help English Language Learner families get involved with conversations that happen at the school. This was also where the computer classes taught by CRB were held.

Rosa joined the program at the beginning of 2016. Because of the computer classes, Rosa now has a Gmail account. But there are many other tech skills she wants to learn this coming year.

“I want to know the other programs I have on my computer, use more of my fingers on the keyboard,” said Rosa.

The TMF award will also allow CRB to file paperwork to reduce monthly home internet costs for Rosa and others, from $45 to $10.

Whalen, who is also an instructor, said that the impact of those computer classes on immigrants and refugees is very immediate. “That’s part of technology, right? That immediate access to information, to opportunities, to resources,” she said.

Whalen recalls seeing that impact hit her inbox on a recent day, following one of the computer literacy classes at Bailey Gatzert. Students had just gone through a lesson on making an email account and practicing writing messages to each other.

After the class was over, Whalen opened her inbox to find an email from one of the parents in the class: “We really want more computer classes.”

“We just thought, how cool, that almost instantly that this parent felt empowered and had a platform for her voice to reach out to me and our partners at Seattle U. It was like full circle I think for myself and for the Seattle U folks — that advocacy piece,” said Whalen.

Learning technical skills is an important part of those classes, but Whalen says that the CRB is really interested in building confidence so that the communities they serve are able to advocate for themselves and their families.

The City of Seattle is now accepting applications for the Technology Matching Fund. Grants of up to $50,000 are available. The deadline is Wednesday, May 4, at 5:00 p.m.

The Technology Matching Fund provides funds for digital equity projects.   The goals of the fund are to increase access to free or low-cost broadband, empower residents with digital literacy skills, and ensure affordable, available and sufficient devices and technical support.

This year the fund seeks to support creative and collaborative approaches.  Priority will be given to projects that strengthen community partnerships, leverage existing expertise, and engage historically underserved or underrepresented communities.

More information is available here, or contact Delia Burke at (206) 233-2651 or communitytechnology@seattle.gov.

The City of Seattle is now accepting applications for collaborative technology projects up to $50,000. City dollars are matched by the community’s contribution of volunteer labor, materials, professional services, or cash.  Get the 2016 guidelines and apply here: http://seattle.gov/tech/tmf.

The Technology Matching Fund provides funds for digital equity projects. The goals of the fund are to:

Kudos to 23 community organizations who successfully completed Technology Matching Fund projects in 2015.  These projects achieved greater digital inclusion for over 4,100 residents in Seattle left behind by the digital divide.

One grantee, Somali Community Services of Seattle (SCSS), received a $9,000 award to upgrade their aging computer lab.   Computers almost a decade old made way for eleven new desktop computers.  The lab has since been used weekly to teach more than 215 youth, adults and seniors a variety of technology skills.  Classes are typically held twice a week for one hour by instructors versed in office computer skills.

Senior immigrants have especially benefited from these classes, because many had not been exposed to computers prior to arriving in the United States. The skills they learned in computer classes helped them write emails and letters to families and friends abroad. Some seniors even expressed a desire to teach these skills to youth as they learn and grow.   Somali businessmen and businesswomen also used the lab for crucial business tasks like creating budgets and flyers.

Executive Director Sahra Farah emphasized the value of City support for community-based organizations like hers.  “These funds help us fulfill our mission of assisting Somali refugee families and community members to achieve self-sustainable status in the communities they live in.  Because computer skills are such vital skills to have in the 21st century, these resources are irreplaceable in helping Somali community members stay relevant, and productive.”

Seattle’s Community Technology Program has been honored by The National League of Cities, Next Century Cities, and Google Fiber with one of their inaugural Digital Inclusion Leadership awards.

The award recognizes the City’s Technology Matching Fund grant program as a leading best practice in fostering digital inclusion. Winners were chosen on the basis of a program’s ability to provide training, access, and hardware to a diverse range of participants, at low cost, with proven results and community engagement. The awards were established to celebrate the cities that are leading programs or empowering community-based organizations to tackle barriers to Internet adoption, and to encourage leaders in the public sector to get involved in digital inclusion by sharing best practices.

Over the past 18 years, the Technology Matching Fund program has enabled 153 community organizations to build their capacity to provide technology and internet access, digital skills training, and electronic civic engagement. The majority of City funding for the program has been allocated from cable franchise fees, and has reinvested over $3.9 million in community based projects. The City’s 2015 Technology Matching Fund projects, selected in July 2015, will collectively receive $470,000, enabling increased digital equity for more than 14,900 residents. Fund recipients are recommended by the City’s Community Technology Advisory Board and approved by the Mayor and City Council. The program has served as a model for other cities.

“This program is part of our ongoing commitment to ensure all Seattle residents can participate in our increasingly digital society,” said Michael Mattmiller, City of Seattle Chief Technology Officer. “This award is the result of strong commitment and partnerships for digital equity between our community organizations, Mayor Ed Murray, City Council, Community Technology Advisory Board, Department of Information Technology and the many volunteers and supporters working to help bring digital inclusion to all residents.”

The award was presented to the City of Seattle’s Department of Information Technology’s Community Technology Program on Thursday, November 5, at the National League of Cities’ Congress of Cities event in Nashville, Tennessee.

For more information on the Technology Matching Fund and the Community Technology Program in the Department of Information Technology, visit http://www.seattle.gov/tech/TMF.