Councilmember Teresa Mosqueda’s legislation on domestic workers, known as the Domestic Workers’ Bill of Rights, was signed by Mayor Jenny Durkan today during a bill signing event at Casa Latina. Seattle is the first city in the country to pass a Domestic Workers’ Bill of Rights, which guarantees workers earn minimum wage, rest and meal breaks, protects workers from wage theft and from having their documents withheld.

“Today, we elevate the voices of domestic workers who are more likely to be women, people of color and immigrants. These are the workers who power our city. They are our caretakers, our guardians, and they care for our homes and families. In this era, we must do everything we can to protect the most vulnerable workers, and create new opportunities for worker voices to be heard,” said Councilmember Mosqueda (Position 8, Citywide).

Council Bill 119286 impacts approximately 33,000 domestic workers in Seattle  including nannies, house cleaners, gardeners and home care workers. The changes go into effect July 1, 2019 and will be enforced by the City’s Office of Labor Standards.

The legislation also establishes a Domestic Workers Standards Board, which will be tasked with recommending how to implement new labor standards, such as retirement benefits, worker’s compensation and sick leave. The board will meet during the first quarter of 2019.

Following this legislation, Councilmember Mosqueda and Councilmember Lisa Herbold are working on a companion bill that will ensure domestic workers are protected from discrimination and sexual harassment. Discussion of this legislation will occur during the Civil Rights, Utilities, Economic Development and Arts Committee in August.

“For far too long, domestic workers have lived and worked in the shadows of our economy. Domestic workers – who are primarily women, immigrants and people of color – and hiring entities have called for more protections. This bill extends basic labor protections to those whose work makes it possible for so many people to go to work, knowing their loved ones and home are cared for,” said Councilmember Mosqueda (Position 8, Citywide), Chair of the Housing, Health, Energy and Workers’ Rights Committee. “I want to thank my Council colleagues, the workers, the hiring entities, the Mayor, advocates and community members who all came to the table to work on this legislation. Together, we will continue to advance workers’ rights so every worker in Seattle can work in a respected and regulated environment.”

“Domestic workers are caregivers, life givers, and they’re valued. This legislation improves the working situation for both workers and employers, and sheds light on the grey economy, impacting the lives of those who leave their own children to care for other families and care for our homes,” said Councilmember Debora Juarez (District 5, North Seattle), and Vice Chair of the Housing, Health, Energy and Workers’ Rights Committee.

“This legislation shows that we value all workers. It also demonstrates an approach to good governance, as this legislation went through a collaborative process with input from workers, employers, worker organizations and the community,” said Councilmember Sally Bagshaw (District 7, Pioneer Square to Magnolia). “I want to thank Councilmember Mosqueda for her leadership and for sponsoring this important piece of legislation that offers new protections for domestic workers and provides guidelines and information for our responsible employers.”

“Domestic workers are the backbone of our economy. They look after our children, assist our aging seniors, and take care of our homes. This is tough and meaningful work that makes it possible for families, particularly women, to have careers outside of the home,” said Councilmember Mosqueda. “With the Domestic Workers’ Bill of Rights, we have the tools to improve the lives of those working in the grey market, those left in the shadows of our labor protections for far too long. Seattle’s domestic workers deserve the workplace protections everyone else benefits from.”

There are approximately 33,000 domestic workers in Seattle, according to a report by Seattle Domestic Workers Alliance, including nannies, house cleaners and home care workers, many of whom aren’t covered by basic labor protections.

“I worked for a family as a nanny, that also asked me to care for their elderly father, as if I was a certified home care worker, and expected me to be a full-time cleaner during their vacation getaways. When I worked over 50 hours, they only submitted 40 hours worked, claiming I was salaried to avoid paying overtime. There are a lot of good employers out there, but this kind of thing shouldn’t happen to anyone in our field. It’s not allowed in other workforces, and it shouldn’t be allowed in ours,” said Michelle Manney, a Seattle domestic worker.

“I’ve worked as a live-in nanny in Green Lake for years. With my current family, I have traveled all over the world and they have always treated me as a part of the family. But it’s also a job, and we need to set boundaries and separate feelings from work. The Domestic Workers’ Bill of Rights will help make this happen by covering live-in workers and establishing a Standards Board where we can come together,” said Maria Flores, a Seattle nanny.

The legislation also establishes a Domestic Workers Standards Board, made up of workers, employers, workers organizations, people who hire domestic workers and community members. The Board will recommend new labor standards such as retirement benefits, workers’ compensation and sick leave. The board will also be tasked with creating innovative mechanisms for implementing those standards, such as benefits that are portable among multiple employers.

“Our clients support this legislation because they realize the trickle down benefits of creating standards.  The beneficiaries of these protections are not just their employees, but their children. When workers feel valued and have the opportunity to access training and education, children will ultimately be the ones who are positively impacted,” said Emily Dills from the Seattle Nanny Network.

Mosqueda’s legislation was crafted after organizing an extensive city-wide listening session tour earlier this year, which included hearing from domestic workers, employers, academics and community members, and helped to inform her work on the base legislation.

The legislation will go before the full Council Monday, July 23 at 2 p.m. 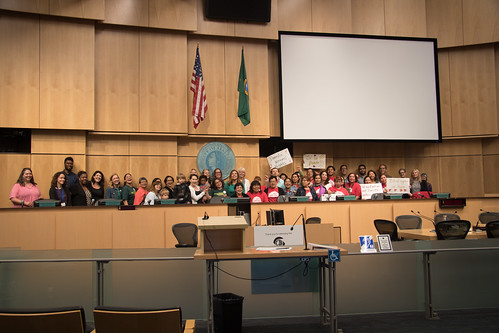 “Today’s 8-1 vote adopted the Seattle City Light Strategic Plan and the rate path proposed by Mayor Jenny Durkan and includes a request from the Mayor to transmit a rate path, including an average 4.5% rate increase over the next six years – averaging about $3.77 per month for the typical residential customer in 2019. These rate increases are lower than what was originally proposed by City Light, thanks to the great advocacy of the all-volunteer City Light Review Panel, and tasks the Review Panel with preparing recommendations for rate design changes for the first time in decades thanks to the work of Councilmember Mosqueda, who chaired the Strategic Plan Select Committee.

“As part of the Strategic Plan, City Light will work to reduce the costs associated with large capital projects, as well as Operations and Maintenance costs, with a priority on promoting good, living-wage jobs, workforce stability, and continuing to deliver affordable and clean electricity to customers while maintaining worker safety. Highlights include the Council-added initiative to meaningfully address workplace culture concerns, particularly with respect to gender- and race-based harassment, and fear of retaliation among staff; operationalizing institutional memory, so when workers retire, we don’t lose their knowledge of how the utility operates; and a continued emphasis on energy and nature conservation, ensuring that Seattle City Light remains the Nation’s greenest utility.”

The resolution sponsored by Councilmember Mosqueda also requests that the Review Panel, in collaboration with key community partners and industry experts, begin work this fall on updating how rates are designed and structured, and make recommendations to more equitably apply rates beginning next Summer.

“Rate Design hasn’t been significantly updated since the 1980’s, and this work is long overdue,” Mosqueda continued. The chair said she hopes the Rate Design review process will keep conservation at the forefront, while examining financial policies, and providing Council with the information necessary to update the rate path and consider additional changes in 2019 to ease the impacts of these rate increases on working families and small businesses.

“Through ongoing oversight and collaboration, I look forward to setting a new standard for good governance and engagement with the Review Panel and community, one that ensures City Light is held accountable, while continuing to deliver the best service possible to its customers,” added Mosqueda. “My team will continue to be engaged at a heighted level with City Light, the Mayor’s office, colleagues, and the community at large, to reign in costs, reduce overruns, and address the Rate Design changes needed to make sure City Light can continue to grow into the Public Utility of the Future!”

“Today’s ruling serves as a reminder that certain moneyed interests, like the Freedom Foundation and the Koch Brothers, are threatened by workers and unions and will use any means necessary to attack them. Make no mistake, the Janus case was an attack on workers, an attack on the democratically-elected institutions, and an attack on the ability to have a collective voice. The Janus case was an attempt to halt workers’ ability to come together to make our communities more equitable, to promote the public health, and increase our economic resilience. But it won’t work.

“Here in Seattle and in Washington State, labor unions are the backbone of the campaign that won paid sick and safe time, paid family and medical leave, and equal pay for equal work. Today, labor unions are the organizations that defend all worker’s ability to access overtime pay, workers’ compensation, unemployment insurance, workplace safety requirements and protections from harassment. Labor unions are the organizations that advocated for the end of child labor, so that our children can go to school to learn instead of going to toil in factories. Labor unions fight for the rights of all workers, union and non-union members, so that every working family has a fighting chance to make ends meet, have a voice at work, and doesn’t have to choose between a roof over their heads and a meal on their tables.

“I’m proud to live in Seattle where we have strong unions, elected officials who work with our unions, and a community that supports organizing. Our City unions helped pass the nation’s first $15 city-wide minimum wage, are on the forefront of organizing in the gig economy and fighting wage theft, and will now innovate in the face of Janus.

“In the last few months, we’ve seen workers across the country organize in the face of threats and intimidation – from the teachers’ strikes in red states, to the fast food strikes among the lowest wage workers, to Boeing workers organizing and then voting YES to join the union in South Carolina.

“We know that regardless of today’s US Supreme Court decision, workers and community will continue to organize, we will continue to grow union strength and power, will continue to demand better wages and benefits for all – knowing that union jobs support our local businesses and our community’s economy.

“While corporations, billionaires and their political allies, spent countless hours and dollars working to prevent the collective voice of workers and unions, today’s decision only means that we – as a community, elected leaders, the faith community and good businesses – are called upon to continue to proudly stand with unions and workers at the local level to lift wages, bargain fair contracts, and promote equity. So, let’s rise, let’s organize and let’s not give up.”

Councilmember Teresa Mosqueda has dedicated her career to defending workers’ rights, healthcare access, and to standing up for economic justice. Before she was elected to the Seattle City Council, she served as the Political and Strategic Campaign Director of the Washington State Labor Council, AFL-CIO. While there, she drafted and later lead the campaign to pass Initiative 1433, guaranteeing paid sick and safe leave for all workers in Washington state, and raising the minimum wage for all low-wage working families. Prior to working for the Washington State Labor Council, she worked at the Children’s Alliance for 10 years, where she led the implementation of Apple Health for Kids.