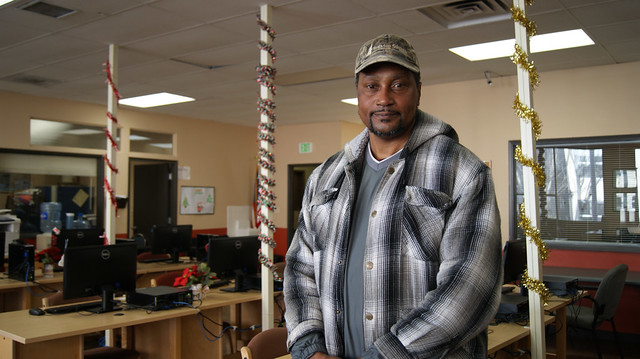 “Martin G. Johanson wanted everyone to feel like a millionaire whether they had a nickel in their pocket or nothing at all,” Executive Director Jim Miller tells me.

In his quest to make this vision a reality, Seattle’s Millionair Club Charity (MCC) was formed in 1921. A local businessman, Johanson watched as his city reeled from the economic devastation of WWI leaving many unemployed. While some charities were providing hot meals, Johanson believed the key to breaking the cycle and providing people with the agency to lead a dignified life was the privilege of a well earned paycheck.

“That’s why we’re a job-first organization,” Miller adds. While the organization couples job opportunities with housing support, the Millionair Club is known for having provided over 800 workers this year to over 1000 businesses who hired people who’ve experienced homelessness or are currently experiencing homelessness. For many that’s the first time someone’s offered them a tangible solution.

Currently the organization focuses on providing people with Food Handler’s Cards and MAST (WA State’s Mandatory Alcohol Server Training) licensing. Many people often lack the $10-$15 cost of a certification and that alone can be the barrier that keeps them from accessing a job. What’s more is that even if the money was available and prioritized, an online course means access to a computer is a necessity.

Herein lies the beauty of The Millionair Club. It’s a thoughtfully assessed system that foresees solutions to barriers that may be holding their clients back. It’s that kind of foresight that prompted the organization to develop a small, eight-station computer lab devoted to job support. But they didn’t stop there.

As the need grew and the positive effects rippled out, the social entreprise knew they had to keep up with the demand from their clients. With support from the City of Seattle Technology Matching Fund through a $21,800 grant, The Millionair Club developed their small computer lab into a Workforce Development site equipped with 32 workstations. Now folks can come in to the same place where they can shower, do laundry, store their belongings, eat a hot meal, pass their food handler’s certification test, and even get work clothes for employment the very same day.

“We love it when people say ‘I came in for lunch, I came out with a job!’” says Christine Rylko, Director of Communications at The Millionair Club. What’s more is that the organization also provides transportation to and from work and a completely free vision clinic for folks who need glasses (much needed for job readiness!) Coupled with housing opportunities, free showers and laundry, the place is a one-stop shop for people to get back on their feet.

With over 4,500 people without a home identified during this year’s One Night Count and 6,000 more in King County shelters, that kind of program is revolutionary and indeed much-needed.

“I want to pass that on to anyone out there who needs help to work. The MCC is where it’s at for good clothing and work.  In fact, I haven’t heard of any organization out there that’s like them.  Everyone should come to the MCC for help because it’s #1,” says Sam, a client who experienced both the pains of homelessness and the joy of finding his way back to a secure home with the help of The Millionair Club.

With stories like this, the organization’s name is no misnomer. They are championing the way for Seattle’s homeless population to feel like millionaires themselves.

The City of Seattle is now accepting applications for the Technology Matching Fund. Grants of up to $50,000 are available. The deadline is Wednesday, May 4, at 5:00 p.m.

The Technology Matching Fund provides funds for digital equity projects.   The goals of the fund are to increase access to free or low-cost broadband, empower residents with digital literacy skills, and ensure affordable, available and sufficient devices and technical support.

This year the fund seeks to support creative and collaborative approaches.  Priority will be given to projects that strengthen community partnerships, leverage existing expertise, and engage historically underserved or underrepresented communities.

More information is available here, or contact Delia Burke at (206) 233-2651 or communitytechnology@seattle.gov.

The City of Seattle is now accepting applications for collaborative technology projects up to $50,000. City dollars are matched by the community’s contribution of volunteer labor, materials, professional services, or cash.  Get the 2016 guidelines and apply here: http://seattle.gov/tech/tmf.

The Technology Matching Fund provides funds for digital equity projects. The goals of the fund are to:

Kudos to 23 community organizations who successfully completed Technology Matching Fund projects in 2015.  These projects achieved greater digital inclusion for over 4,100 residents in Seattle left behind by the digital divide.

One grantee, Somali Community Services of Seattle (SCSS), received a $9,000 award to upgrade their aging computer lab.   Computers almost a decade old made way for eleven new desktop computers.  The lab has since been used weekly to teach more than 215 youth, adults and seniors a variety of technology skills.  Classes are typically held twice a week for one hour by instructors versed in office computer skills.

Senior immigrants have especially benefited from these classes, because many had not been exposed to computers prior to arriving in the United States. The skills they learned in computer classes helped them write emails and letters to families and friends abroad. Some seniors even expressed a desire to teach these skills to youth as they learn and grow.   Somali businessmen and businesswomen also used the lab for crucial business tasks like creating budgets and flyers.

Executive Director Sahra Farah emphasized the value of City support for community-based organizations like hers.  “These funds help us fulfill our mission of assisting Somali refugee families and community members to achieve self-sustainable status in the communities they live in.  Because computer skills are such vital skills to have in the 21st century, these resources are irreplaceable in helping Somali community members stay relevant, and productive.”

Seattle’s Community Technology Program has been honored by The National League of Cities, Next Century Cities, and Google Fiber with one of their inaugural Digital Inclusion Leadership awards.

The award recognizes the City’s Technology Matching Fund grant program as a leading best practice in fostering digital inclusion. Winners were chosen on the basis of a program’s ability to provide training, access, and hardware to a diverse range of participants, at low cost, with proven results and community engagement. The awards were established to celebrate the cities that are leading programs or empowering community-based organizations to tackle barriers to Internet adoption, and to encourage leaders in the public sector to get involved in digital inclusion by sharing best practices.

Over the past 18 years, the Technology Matching Fund program has enabled 153 community organizations to build their capacity to provide technology and internet access, digital skills training, and electronic civic engagement. The majority of City funding for the program has been allocated from cable franchise fees, and has reinvested over $3.9 million in community based projects. The City’s 2015 Technology Matching Fund projects, selected in July 2015, will collectively receive $470,000, enabling increased digital equity for more than 14,900 residents. Fund recipients are recommended by the City’s Community Technology Advisory Board and approved by the Mayor and City Council. The program has served as a model for other cities.

“This program is part of our ongoing commitment to ensure all Seattle residents can participate in our increasingly digital society,” said Michael Mattmiller, City of Seattle Chief Technology Officer. “This award is the result of strong commitment and partnerships for digital equity between our community organizations, Mayor Ed Murray, City Council, Community Technology Advisory Board, Department of Information Technology and the many volunteers and supporters working to help bring digital inclusion to all residents.”

The award was presented to the City of Seattle’s Department of Information Technology’s Community Technology Program on Thursday, November 5, at the National League of Cities’ Congress of Cities event in Nashville, Tennessee.

For more information on the Technology Matching Fund and the Community Technology Program in the Department of Information Technology, visit http://www.seattle.gov/tech/TMF.