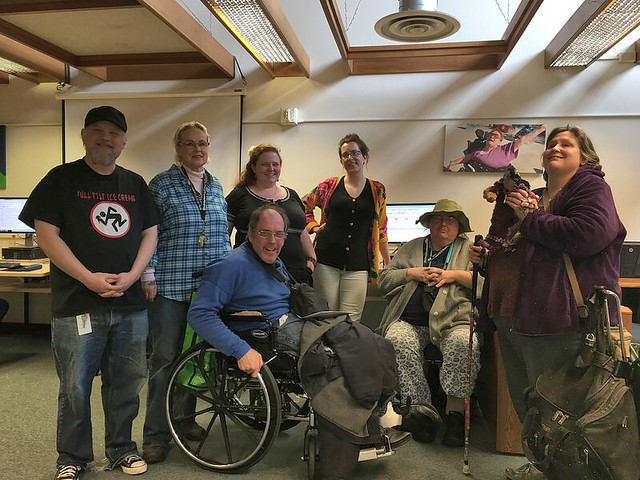 It was an especially cold December afternoon when I visited the STAR of Seattle in the Central District. I was greeted by Misha, a STAR volunteer, who was sitting at the front desk in a room full of purring computers.  STAR stands for Special Technology Access Resource and its mission is to empower people of widely varying abilities and disabilities to build community using computers, the internet and assistive technology.

I was floored when I toured the assistive technology available in the Center — things I didn’t even know existed like a braille printer and enlarged print keyboards for people with low vision.

In an era where we often talk about how technology alienates us (think of your family looking at their phones instead of each other at the dinner table), Seattle Housing Authority (SHA) residents are finding ways to connect with each other through technology.

In 2015, the Technology Matching Fund through the City of Seattle, allocated $24,269 to the SHA to replace a total of 18 computers; nine at the STAR of Seattle and nine at the Westwood Heights Technology Center.

In collaboration with Full Life Care, a non-profit situated adjacent to the STAR that supports people with chronic illnesses, and physical or developmental disabilities, the TMF also provided for the creation of a database capable of tracking visitors at six SHA computer labs.

The STAR of Seattle is the largest of the SHA computer labs and is the only one open to the public.

Mike Pollack, the Information Systems Manager at Full Life Care, says the STAR and Westwood Heights Centers combined serve about 200 people per year, while Jefferson Terrace, Denny Terrace, and Barton Place serve between 40 and 80 residents each. Data collected from the labs is helping to assess resident needs and inform future grant applications.

Full Life Care, for example, recently received grant money to build out a mobile computer lab that will expand computer access to more SHA buildings. The mobile lab will also provide community workshops on everything from how to protect your privacy when using social media to digital photography and video chatting.

According to volunteer Dorene Cornwell, the STAR Center is a place where people can come and gain access to the resources they need, at a pace that works for them.

“I’m a big fan of peer support and of emphasizing the community value of shared space,” Cornwell says.

That’s why SHA residents organized the Resident Leadership Development Team Seattle Conference, held on December 16th. One of the sessions, “Accessing Technology in Low-income Communities,” covered a broad range of topics including how to coordinate trainings in SHA buildings, the process of applying for technology grants, and programs that provide low-cost internet and discount laptops.

As more essential activities like banking and job applications migrate online, Cornwell explains, the challenges for people in her community multiply. Sure, online resources can be really convenient, “but if somebody is not comfortable with the technology, it’s just another dang intrusion, another way to be frustrated when our lives are kind of difficult anyway,” Cornwell says.

This begs an important question: how de-sensitized are we becoming to the privileges that our personal technological devices grant us? I wrote this article entirely on my smartphone, but for some, even accessing an online article presents major obstacles.

When it comes to all of the devices we use and have access to on a daily basis, having the skills to make the most of that access, Cornwell emphasizes, “is never to be taken for granted.”

The City of Seattle is now accepting applications for the 2017 Technology Matching Fund (TMF). In 2016 the city awarded 10 community organizations a total of $320,000 in Technology Matching Funds. This funding assists more than 2,500 residents in historically underserved or underrepresented communities who lack the necessary technology access and essential digital skills to thrive in the 21st century.