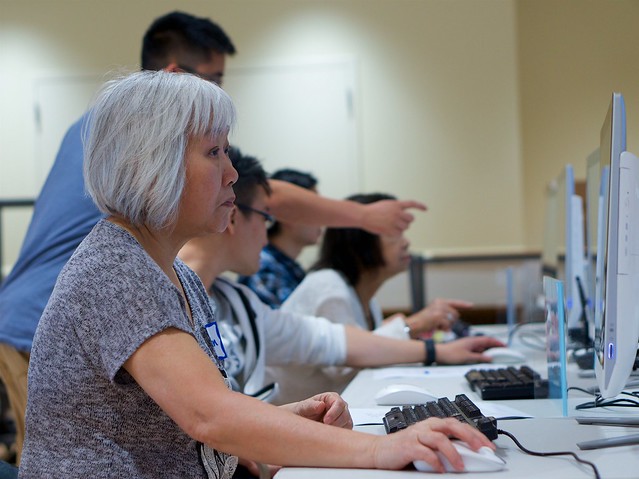 Founded in the 1980s as the first Chinese nursing home operated by the Chinese community in the nation,  Kin On now serves over 500 Asian seniors in the Greater Seattle area.

Their mission is to “support the elderly and adults in the greater Seattle Asian community by offering a comprehensive range of health, social and educational services sensitive to their cultural, linguistic and dietary needs.”

Since opening, Kin On has gone on to win several awards including an honor from the Northwest Asian Weekly Foundation, declaring Kin On Health Care an “Asian-American Pioneer in Healthcare.”

In October 2016, the facility opened a new community center as part of their Healthy Living Program, focused on the physical, mental and social aspects of health for adults over 50. Classes offered include EnhanceFitness®, Zumba®, ballroom and line dance, arts and crafts, technology, evidence-based health education, and more.

At the heart of the Healthy Living Program is the Kin On Smartlab, which was initiated with the City of Seattle Technology Matching Fund.  The goal of the Kin On SmartLab was to “improve social isolation, to increase interaction through email, technology literacy and access to government resources online,” said Jessica Wong who was the main program coordinator from 2015-2016.

Wong said that Kin On serves many immigrants, mostly from China, Hong Kong or Taiwan. She says social isolation is a major problem, so the committee proposed the idea of a “SmartLab” to combat this, speaking to the educational, mental and social components of the Healthy Living Program.

The organization previously applied for the grant from the Technology Matching Fund, and after not being chosen, they applied feedback and received the grant the following year. The SmartLab operates in the 2,600 square foot community center and the program officially began in April of 2016, featuring “all-in-one computers” with a built-in monitor and speakers, allowing for easy take-down and set up, along with a projector allowing students to see skills being taught on a larger screen.

Its first set of classes included “Computers Made Easy,” teaching students basic fundamentals of using a computer. From April to July 2016, four, two-hour classes were taught once a month on select Saturdays by young professionals in the technology field. About 10 volunteers are present for each class to assist the students. There are also two open lab tutors who give one-on-one lessons twice a week.

The SmartLab is open to the community and seniors aged 50+ can sign up by phone, in-person, or with help from a family member or friend, through an online application which is offered in English and Chinese.

Seniors who sign up are encouraged to come in and ask questions about smartphones and tablets and computers. One former nurse from Kin On, Eliane Dao, has transitioned into becoming a regular student in the SmartLab. “It has been about three months and I am very happy that I have found a great teacher,” she explained, “He will teach you anything you ask.”

“We hope to grow to serve more people and also offer a larger variety of classes,” Wong said of Kin On’s goals for the future of the technology program. “For this coming year, we have improved our methods and how we teach by simplifying the classes with more repetition and practice time.” The 2017 classes schedule is now available online.

The SmartLab will continue to push towards its three main goals: combatting social isolation through online access to social media and communication platforms, improving technology literacy, and increasing access to health and government resources online.

The Artists Up (AU) collaborative and host partner Daybreak Star Indian Cultural Center welcomed approximately 70 multi-generational Native artists from Seattle, King County and outlying areas for its final informational and networking session on April 20th. After a blessing and a Native meal, artists engaged in peer-to-peer conversations alongside agency staff from four funding agencies to learn how best to navigate funding processes, to prepare materials and to develop their artistic careers. A final report will include information from the Native artists event and make comparative links to output from the three other artist groups served.

Building relationships, sharing resources and learning how our offices can better serve under-represented artists define the purpose of Artists Up, a three-funder collaborative (Office of Arts & Culture, 4Culture and Artist Trust). The partnership has reached out to Latino, Hispanic, Asian, Asian-Pacific Islander, Asian American and African, African American, Black artists in the last two years. Having sparked these connections, the Artists Up team will continue deepening this targeted support in the future to assure our communities are enriched by a diverse range of artistic and cultural experiences.