The resolution was introduced to the Committee during a special hearing on Wednesday, July 18 at 12:00 p.m.

“With Wednesday’s committee meeting, we’re reaffirming our commitment to establishing a connected, protected bicycle lane network in downtown Seattle,” said O’Brien.  “We’re also committing Seattle to achieving zero traffic fatalities and serious injuries by 2030.  Given what’s at stake, it’s too expensive not to make more investments in completing the bike network for all to utilize and enjoy,” added O’Brien.

O’Brien was joined by advocates and riders alike who spoke to the efficiencies of bike lanes, and the cost-effectiveness of a network, which may help to mitigate the ‘period of maximum constraint’ anticipated in 2019.

“Everyone who wants to bike should be able to because biking can make us happier, keep us healthier, save us money, and reduce climate pollution,” said Clara Cantor, Community Organizer, Seattle Neighborhood Greenways. “Approximately 60% of Seattleites want to bike more, and the lack of safe, connected, routes is the number one reason why they don’t. That’s why we are excited to see Seattle committing to this bold, yet achievable timeline for building out the Basic Bike Network downtown.”

“Today’s vote marks an important step forward for the thousands of people who already bike in downtown Seattle every day. A network is only as strong as its weakest link: This resolution sets a concrete timeline for an end-to-end route through downtown, making critical connections between the 2nd Avenue spine and bike lanes in surrounding neighborhoods. Together these routes will create a Basic Bike Network that will makes biking a more safe and convenient option for even more people who live and work in Seattle,” said Vicky Clarke, Seattle Policy Manager, Cascade Bicycle Club. 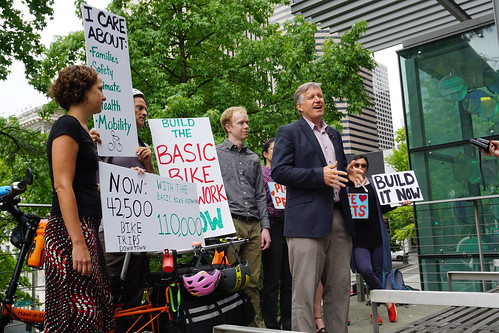