At a Seattle City Council hearing Wednesday, Seattle Police Department officials were questioned about the police response to an un-permitted May Day march on Capitol Hill, which grew into a full-scale riot.

To better illustrate the timeline of events leading up to the riot, the Seattle Police Department has assembled details from police radio dispatches and operational logs (quoted below), and photos and video from social media and news outlets, showing the numerous criminal acts that occurred throughout the evening.

Prior to the evening march on Capitol Hill, police had escorted two other peaceful demonstrations—one planned and permitted by El Comite, the other unplanned—through Seattle’s streets.

Activist Mark Cook speaking to the croud at the Black Lives Matter rally in Seattle, Friday, May 1, 2015. (Steve Ringman / The Seattle Times)

1:38 PM: “Group is holding at 23rd and Judkins giving speeches in the intersection. No information being given on where they plan on marching.” The unplanned MLK park march remained peaceful, eventually joining with a larger demonstration group Judkins Park in the Central District. As the day wore on, police noticed many armed, masked individuals merging with the otherwise calm march.

3:03 PM: An SPD sergeant alerts officers he has received a report from a demonstrator, who overheard “five individuals saying they wanted to kill” an officer.

3:47 PM: The El Comite march, estimated to be at least 1500 people, moves through downtown Seattle toward Federal Courthouse at 8th and Stewart. Officers spot a crowd of approximately 75 people wearing masks clustered in the crowd.

@smithla8 Everything’s been peaceful to this point. — Seattle Police Dept. (@SeattlePD) May 1, 2015

4:10 PM: Police make their first arrest of the day,after witnesses report seeing a man smash a garage window in the 1600 block of Belmont Street. Officers arrest the 20-year-old suspect and find he is carrying a pipe wrench, a soda bottle filled with dark green paint, and a foot-long machete, painted with the word “death,” punctuated by a skull.

4:34 PM: Officers spot a group at University and Boren carrying what appear to be ax handles.

4:58: The march arrives at the Federal Courthouse.

5:33 PM: After courthouse event ends, officers spot a man with a rifle slung over his shoulder, walking with demonstrators up to Capitol Hill.

5:59 PM: Police note a crowd of 100 people have gathered for a rally at Seattle Central College on Capitol Hill.

6:04 PM: Officers respond to a report of a “Male with no shirt, with hammer going southbound to Cal Anderson Park.”

6:25 PM: Groups in the Seattle Central crowd begin handing out poles and monkey wrenches. Officers later discover the poles are studded with metal bolts, similar to items used to shatter business windows and damage vehicles at unpermitted May Day events in years past.

6:57 PM: A large crowd begins moving north on Broadway from Seattle Central, increasing in size as the group absorbs bystanders from the sidewalks.

As the unplanned march moves north on Capitol Hill, police begin seeing instances of violence and vandalism from members of the crowd.

6:59 PM: “Bike officer stating [over radio] his bike is being grabbed.”

7:08 PM: Officers see a white male wearing a black mask and baseball cap break a hole in a window.

7:11 PM: Someone in the crowd throws a chair at officers as they attempt to keep ahead of the large group of marchers. Several hundred members of crowd break into a full run down Boylston, before circling back to Broadway.

7:16 PM: Police receive a report of additional property damage in the wake of the un-permitted march. The crowd pelts officers with bottles and rocks as they move through Capitol Hill.

7:19: Officers see an individual in the crowd firing a slingshot at buildings (suspect pictured right). 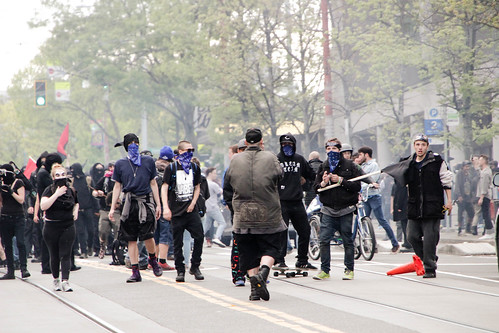 Other members of the group begin throwing barricades into street at Broadway and Denny. SPD Captain Chris Fowler directs officers to issue a dispersal order to the crowd–a legal order to clear the streets.

7:22 PM: A 32-year-old man throws a weighted traffic pylon at an officer working the perimeter of the unplanned march. The suspect flees from officers and attempts to disappear into the crowd. Officers report individuals in the crowd are also throwing rocks.

7:24 PM: Bike officers move in and arrest the assault suspect.

As officers take the suspect into custody, the crowd begins striking officers with sticks and throwing rocks.

When officers searched the 32-year-old suspect, they discovered he was carrying rocks, a knife, two heavy wooden poles, a battery, a wrench and a rock hammer:

The incident involving this 32-year-old man became a focus of discussion at Wednesday’s City Council hearing. Some cited the arrest of the suspect–who brought a knife, hammer, wrench, and rocks to a demonstration—as a flashpoint in the evening. Police officials pointed out that, prior to the arrest, members of the crowd had repeatedly pelted officers with volleys of rocks, bottles and other projectiles, and committed numerous acts of vandalism.

7:28 PM: In response to the violence, officers deploy pepper and noise devices to disperse the crowd.

7:33 PM One officer is injured in the melee at Broadway and Howell.

7:57 PM: An individual in the crowd launches an improvised explosive device at police, injuring five officers.

8:05 PM: A brick is thrown through back window of police vehicle.

8:12 PM: The crowd begins throwing rocks at officers at Denny and Summit. Captain Chris Fowler declare the incident a “riot.”

Man who calls himself “Asia” said he hit a cop and broke his wrist. He’s getting help from a “medic.” #MayDaySea pic.twitter.com/nmHZwoncHd — Evan Bush (@evanbush) May 2, 2015

8:28 PM: Officers request a vehicle with a public address system to give a dispersal order.

8:45 PM: The crowd blocks Broadway and Pike, starts fires in the courtyard of Seattle Central Community College, and vandalizes the school building.

One demonstrate burning is flag while another spray painted the sculpture with an anarchy symbol #MayDaySea #video pic.twitter.com/ruAQ6u74JV — Lauren Frohne (@laurenfrohne) May 2, 2015

9:26 PM: Officers see a man with rifle passing his weapon to others in the crowd to pose for pictures.

Officers continue to monitor the crowd as it disperses, with some smaller groups heading back into downtown Seattle.

Nine officers were injured in the Capitol  Hill melee—three required hospitalization—and police arrested a total of 16 suspects—15 men and one woman—during the evening. Four of those suspects are Seattle residents. The other 12 are from Olympia (2), Kent (2), Shoreline (2), Mercer Island, Kenmore, Lacey, Puyallup and Des Moines. Police are still working to determine to the city of residence of a 21-year-old woman arrested for felony assault.